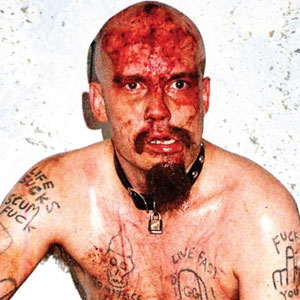 Los Angeles, CA April 20th, 2014 – The Museum of Death, in conjunction with Merle Allin, is pleased to present the unveiling of THE RESURRECTION OF GG ALLIN, a new exhibit located inside the Museum of Death located in Hollywood, CA. at 6031 Hollywood Blvd., Los Angeles, CA, 90028. This exhibit will consist of the actual outfit that GG Allin was wearing the night of his untimely demise. Also on display will be original artwork, letters and video of GG’s final performances.

From the very inception of rock and roll there have always been controversial performers who have chosen to break the conventional rules and do things their own way. In the 1950’s it was Elvis Presley, who was considered risqué with his gyrating hips, while Jerry Lee Lewis was making headlines for marrying his thirteen year old cousin. The 1960’s saw bands and performers experimenting with drugs and protesting the Vietnam War, while The Doors front man, Jim Morrison, was getting arrested for indecent exposure and for using profanities on stage. The 1970’s brought even more decadent behavior with the likes of Iggy Pop, Alice Cooper, and the punk rock movement with Sex Pistols members Johnny Rotten and Sid Vicious.

However, all of this would pale in comparison to the 1980’s and 1990’s with the emergence of shock rocker GG ALLIN, whom proclaimed himself “THE ROCK AND ROLL TERRORIST”. GG was a songwriting genius, with an extensive catalog of over fifty recordings, with such bands as The Jabbers, The Scumfucs, The Texas Nazis, The Holy Men, Bulge, The Aids Brigade, and his most notorious band, The Murder Junkies. Despite his undeniable musical talents, he will always be best remembered for his outrageous, controversial, and extreme stage performances that included defecation, urination, masturbation, self-mutilation, performing and receiving oral sex, and attacking and terrorizing his audience.

GG’s shows were fueled by alcohol, drugs, and the rage he felt while singing the violent, perverted, and hate filled lyrics to his songs. Covered in his own blood and feces, he would prowl the stage stalking the weak or the people he thought were just attending the show to see a spectacle. He was a ticking time bomb ready to explode on anyone who dared to cross him or stand in his way. You could have been his best friend before the show, worst nightmare during the show, and his bitter enemy in the aftermath of the show. GG could, and would, snap on anyone in a moments notice. Many of his shows would end after a few songs due to his violent behavior, and audience members had been known to leave a show with broken bones or even on a stretcher.

GG was arrested over 52 times for acts that included indecent exposure, endangering the lives of his audience, defecating on stage, assault and battery, and many other deviant acts. In September of 1989, he was arrested for intent to commit bodily harm less than murder, and served three years in a Michigan prison. After his release from prison in 1991, GG’s violence escalated and he would take his anger out more and more on society and his audience. It was at this time he would join forces with The Murder Junkies, a band I had formed when I moved to New York City in 1990. GG Allin and the Murder Junkies would spend the early part of the decade touring the country while GG was getting arrested on numerous occasions and making frequent trips to hospital emergency rooms all due to his brutal stage antics. In 1993 GG and the band set out on what would become the most violent tour in the history of rock and roll. This tour was appropriately titled ‘Terror in America’. After a month of brutality and bloodshed, GG would come back to New York City to play his final show at The Gas Station on the lower east side of Manhattan. Before the show, GG was partying and doing excessive amounts of cocaine. By the time the show started, he was in a frenzy and was ready to tear the place apart along with anyone that was in attendance. When the show got shut down after two songs, GG took his violence to the streets, turning the lower eastside into a war zone. While he was parading around half naked covered in blood, bottles flying and breaking all over the sidewalks and street, GG was desperately trying to hail a cab to get out of the area in a quest to find drugs, and before being arrested again. He would spend the rest of that night getting high on heroin, and was found dead in an apartment on avenue b the morning of June 28th from an accidental overdose.

That morning I got the call I had been dreading yet expecting for many years. My brother GG had finally reached the end of his destructive journey and his ‘Live Fast Die” mantra had become reality. As I entered the apartment, I saw his lifeless, stiff body lying on the floor. He was still wearing his torn jean jacket, dirty white skirt and knee high boots he had on the day before. I was in shock and disbelief, but I knew I would have to face this day eventually. He cheated death for many years and for all of us who loved him, we were fortunate to have him as long as we did.

In life GG’s mission was to bring danger back to rock and roll. He certainly accomplished that and in the process, while suffering significant pain and sacrifice for what he believed in, he became a cult hero and deservedly so earned the title as the most outrageous performer in the history of rock and roll. His death has left a huge void that can never be filled. However his music and message live on in the present day and in future generations of rebellious scumfucs who crave the kind of rock and roll that crosses all laws and limits, and still gives our parents nightmares.